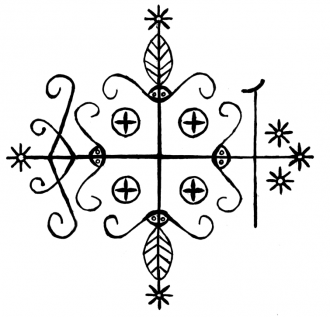 Several years ago, Jake Kimbrell suggested we have a “Scary Art Show” for Halloween.  Being a big lover of all things New Orleans, I knew I wanted to do a painting of Marie LaVeau.  My next challenge was research.  I didn’t want to piss off someone or worse “something”.  I immediately discovered that historically she predated photography and so the only image of Marie is a painting that was derived from newspaper accounts of what she looked like.  I read as many stories about the good side of Marie, the kind and generous acts, as I read stories that speculated more sinister behavior.  I concluded I wanted the painting to reflect both sides.

Next, I started reading volumes about her beliefs. About Vodou itself.  Vodou is a fascinating religion that has been grossly maligned in the media and is very misunderstood.  One thing I read about was “veves”.  Veves are patterns drawn on the ground with corn meal by the Vodousants to conjure spirits.  Different spirits represented by different veves.  The Vodou spirits also have corresponding Catholic saints.  These saints were used by African slaves as a way of practicing their religion without incurring the wrath of their Christian slave owners.  Example, Saint Patrick (often pictured driving the snakes out of Ireland) represented the Snake spirit, Danbala.

I found these veves to be rather artistic and as a streetpainter I identified with drawing something impermanent, yet beautiful on the ground. I decided to make one.

Now, we must flashback further in time…

Perhaps a year or so prior, one of the gallery co-founders, Glenn Morris, had a studio in the front of the building.  Glenn had a large following of female fans that were enamored with the cute and talented, dreadlocked Mr. Glenn.  I call them the Glenn Morris fan club.  One day, one of the fan club, asked if Glenn would watch her pet parakeet while she went on vacation.  She left Glenn with a large container of birdseed.  This would be the last time she ever saw her feathered friend as it croaked during her absence.

A few months later, Glenn moved his studio out of the Gallery.

Flashing back to our story…

So it’s now been several months since Glenn left (and I hadn’t seen hide nor hair of him since)  and I am contemplating doing a veve.  There wasn’t any corn meal in the gallery, so I started rummaging through the old store-room for a reasonable substitute.  I stumbled upon the giant container of bird seed!  Perfect! “I’ll do a veve in honor of the parakeet Glenn killed” (I’m sure Glenn would swear it wasn’t his fault, but none the less..)

I took the seed, some Catholic candles and some incense out in the parking lot.  In those days, I had a portrait I painted of Glenn hanging on the side of the building.  I decided to do the veve under Glen’s portrait.  I drew the veve, and lit the candles, but somehow it failed to have the sybolism I was after.  I had a brainstorm!  I ran up stairs and grabbed a Lotteria deck.  These are the ones I used…

In the center, I had “El Negrito” the black man, symbolizing Glenn. Below Glenn was “El Diablito” (the little devil), above Glenn I put lots of  “El Pajaro” and “El Cotorro” cards, symbolizing the dead parakeet.  On one side of Glenn I had “La Sirena” symbolizing the Fan Club. On the other side of Glenn I had “La Bota” symbolizing the boot that Glenn’s wife would put in his ass if he didn’t beware of the fan club…  I was satisfied that it was all very clever when an acquaintance walk up and asked about it.  I was recounting the symbolism when all of a sudden I heard this voice from behind me…

I turned to look.  “Holy Shit!  It’s Glenn!” I thought.  He had a beautiful girl with him.  I said, “Hey Glenn! I was just doing a veve in….”  He cut me off, “What’s a veve?” he asked.  I explained and then returned to “I was just doing this veve in honor of the parakeet you killed”. Suddenly the girl started shrieking.

“That was MY parakeet!” she yelled out.

Okay folks, this had just turned exceptionally bizarre.  I hadn’t even seen Glenn in months and then he shows up right when I do this veve about him and the parakeet?  We all went upstairs for a cocktail.  I concluded that this girl HAD to model for me.  She simply HAD to be my “Marie LaVeau”.  Ultimately, she agreed.

Some time later, I painted “Cage” (Cage Girl).  I think that was the first time I put a tornado in my work.  And shortly after finishing it a tornado hit nearby.  Here is footage https://m.youtube.com/watch?v=dGy55TEzB6I

A couple of years later I was working on another painting “Beehive”.  I went into the storeroom to find my cat. My poor cat was napping while surrounded by hundreds and hundreds of bees! Softball size clusters of them in places!  I still have many stuck in the flourescent light fixture to this day that you can still see. I managed to rescue my cat without getting stung.

This month, March 2013 “Marie” is on display at the Blood Orange Infoshop over at the Life Arts Building.  You can bet I asked her if she wanted to go before I took her there.  I flipped a coin on a Ouiji board that sits near the painting as decoration.  It landed on “yes”.  I figured that meant Marie wanted to get out for a bit.

When I was a kid, I never played with baby dolls. I had a large collection of stuffed animals that I played with and treated like baby dolls. As I grew up I continued to abhor the idea of having kids. This played a part in my choice of a husband too. I carefully picked out Tim Semic for his shared disdain for having children and also he had a love of going out and traveling a lot which was appealing to me.

We married gloating about how we would be much happier than other friends who would strap themselves down to a house of screaming brats while we flitted from vacation destination, to vacation destination. We would be DINKs! dual-income-no-kids. And that is what we did. Although it still didn’t prevent me from getting divorced later.

I remarried in my late thirties. Kenton O’Donnell. Had four grown-up estranged kids and was left near the border of homeless from the debt caused be them and their mother. See! I KNEW having kids was stupid!

Years later, after marrying Kenton, we were at my Mom’s for Thanksgiving dinner and I am boasting about how clever I am. How I cleverly escaped the financial pit known as “children”.

My mother said, “That’s not why you don’t have kids. Don’t you remember when Homer bit you?”

Upon which, the following flashback must punctuated this blog:

When I was five we had a pet dog named Homer. homer was a large mutt that had been hit by a car once and after that was always a bit vicious if touched in the wrong spot.

My dad was on a trip somewhere on this particular Saturday morning, and I was eating breakfast in my room that mom brought me on a tray before jumping in the shower. Homer was sitting by me begging. I loved Homer. I gave him a big hug. SNAP. My face felt wet.

I ran to the bathroom and looked in the full length mirror behind the door.  I guess I screamed. I don’t remember doing that. The dog bit my face and torn away the skin under my left eye.

My mother must have heard me. She came running in wrapped in a towel. She was hysterical upon seeing me. “We have to rush you to the hospital!” she said panicked.

I clearly remember saying “No mommy! Can’t we just put a band-aid on it?”

I had to have surgery, as the dog had severed the tear tube of my left eye. I had to spend the night. Because I was 5 and not 6, I was put in the infant ward. It was full of babies that screamed all night long.  I had never been away from mom overnight. They kicked mom out at 10 p.m. When visiting hours were over.  I was petrified and awake all night. I kept buzzing the nurse and begging for my mother. I got “Nurse Ratched” incarnate. “your mother is gone until morning. Quit ringing that buzzer and go to sleep!” she snapped.

“Yes I remember mom, but what has that got to do with me not having kids?” I asked?

“From that point on if we were in a store and a baby cried, you flung your arms around your head to cover your ears and closed your eyes until it stopped” ” You never played with baby dolls again either”

The light suddenly came on!

Some years ago I was in San Diego having lunch at a favorite pizza place on India Street.  My folks and I have gone there from the time I was a small child.  We just finished a fantastic meal and I was determined to top it off with a slice of the perfectly layered spumoni ice cream that they served there.  My dessert and coffee had just arrived when my father said he was going outside to put some more quarters in the parking meter.  He walked out just as I was taking a bite of the chocolate layer of my ice cream.  (This was before I discovered a tragic allergic condition I have is caused by chocolate.)  As I bit into the ice cream I about broke a tooth on something hard.  I fished out the offending item and proceeded to analyze it with my mother.  It was pointy and yellowish.

“It’s a tooth!  An animal tooth of some kind” I exclaimed.

My mother looking horrified disagreed “No, it’s a claw!”

Next came the debate about what to do next.  “Do we tell them?” I asked.  “Oh no!  If your father finds out he will make a big embarrassing stink about it!  Don’t say anything.”  She replied.   “But he’ll wonder why I didn’t eat the ice cream!”  I said.   “They made it in layers. The other layers are probably okay. Just don’t eat the chocolate.”  was her solution.  “Mom they get the ice cream from a vendor.  It’s not the restaurant’s fault!  Don’t you think we should tell them?  They may want to buy from someone else.” I said.  “No, your father will still have a fit”.  She said.

So, I proceeded to eat the other layers of my ice cream carefully leaving the chocolate alone.

My father returned.  After I finished eating he asked me,  “Aren’t you going to finish your chocolate?

I feined being too stuffed.

“Here I’ll finish it”  and he drug the plate across the table.

I looked helplessly at my mother.

We stared at each other as my father finished the ice cream.

For years if I was wearing my leather jacket with the fringe along the shoulders I would reach in the pocket and find the rat claw.  I started to refer to the coat as “the rat-claw spumoni coat”.  I still have the coat but the rat claw eventually got away.

Before I asked for the pencil, the paintbrush, or anything else, it was documented by my mother that my first question as a child was “Where’s Cat-Cat?”.   This was very telling of my future. I have battled a cat addiction for many years and it has been very hard not to fall into the stigmatic role of “cat lady”.